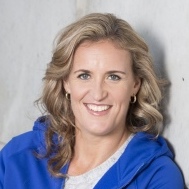 Leana is an energetic and rangy defender and began her international netball career in South Africa where she earned 34 Test Caps.

A move to New Zealand followed in 2000, along with selection in the Silver Ferns where she was a key part of the victorious 2003 World Champion making her on-court debut, and 2006 Commonwealth Games Silver Ferns teams.

A gifted athlete, Leana is a highly effective defender with an outstanding record at international level and in major competitions. She was also part of the Waikato Bay of Plenty Magic team which won the ANZ Championship title in 2012 and in 2016 captained Magic to win the NZ Conference final.

Part of a select group to have played in five Netball World Cups while also notching up three Commonwealth Games tournaments, Leana is a World Cup and Commonwealth Games winner and is in rare company as one of just six Silver Ferns to play over 100 tests.

Leana chose to retire from international duties in 2017 after a 13-year career in the Silver Ferns, but joined her new Auckland team in the ANZ Premiership – the Northern Stars.