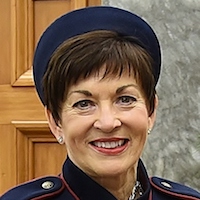 Dame Patsy went to Victoria University of Wellington where she studied for a law degree. She graduated with an LLB in 1976 and an LLM (First Class Honours) in 1979. She joined the Law Faculty as a Junior Lecturer and subsequently as a Lecturer.

Dame Patsy has had extensive experience in governance and consulting roles, both in the private and public sector. In addition to Air New Zealand and Sky City Entertainment she has served as a non-executive director of Telecom Corporation, Southern Petroleum and New Zealand Post. Her current governance roles include Chair of the New Zealand Film Commission, Deputy Chair of New Zealand Transport Agency, Chair of Education Payroll Ltd and independent director of Payments NZ Ltd. She has also served as a member of the NZ Markets Disciplinary Tribunal and as a member of the Risk and Assurance Committee for the Department of Prime Minister and Cabinet. Major consulting roles have included as an Independent Reviewer (with Sir Michael Cullen) of Intelligence and Security in New Zealand, Independent Facilitator of the Joint Working Group on Pay Equity, Senior Reviewer for Performance Improvement Framework Reviews of government agencies, and as a Chief Crown Negotiator of Treaty Settlements for Tauranga Moana and Te Toko Toru.

Dame Patsy has also had significant involvement in governance of creative and charitable organisations, including as Trustee of the New Zealand International Festival of the Arts, the Victoria University Foundation, the Victoria University Art Collection Trust, the Spark Art Trust, the Wellington Jazz Festival Trust, the Symphony Orchestra Foundation, and Sky City Community Trust. She was a founding Trustee and advisory board member for New Zealand Global Women and has chaired the Board of the New Zealand Film Archive.

In 2014 she became a Dame Companion of the New Zealand Order of Merit (DNZM) for services to the arts and business.